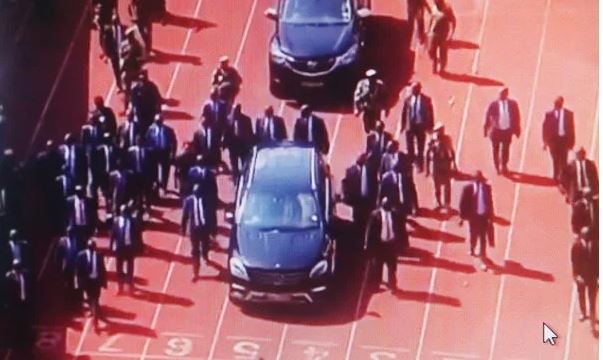 President Emmerson Mnangagwa’s security is reported to have been scaled up ever since he survived an explosion at White City Stadium in Bulawayo in June. The explosion killed two people and injured well over 40 other people. Since the explosion, the President’s security is now searching all dignitaries at public functions including Cabinet ministers. At the Defence Forces Day commemorations on Tuesday at the National Sports Stadium, Mnangagwa’s car was mobbed by more than 40 security aides.

A source who previously spoke to the Daily News after the attack said,

We are facing an extremely high threat from these attacks and the government will continue to take precautionary measures to protect the president. We must remain extremely vigilant. You will see an increase in heavy weapons, bomb squad personnel, radiological detection teams and our technology at all public events which the president will address.