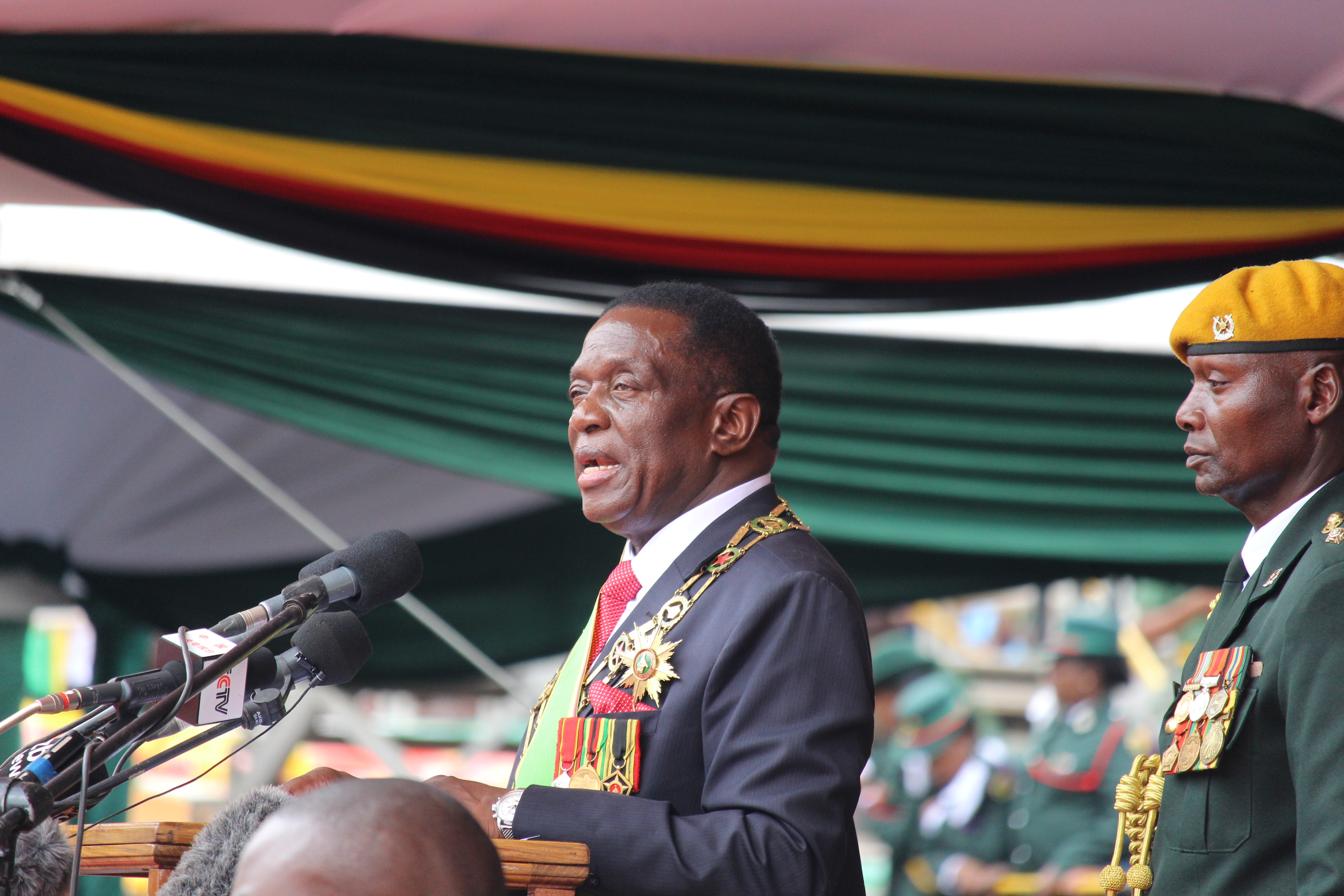 Distinguished guests; ladies and gentlemen; I am humbled to address you today, on this important day and gathering in the history of Zimbabwe where we celebrate the works of our Defence Forces.

The entire nation joins our illustrious sons and daughters in the military to celebrate this 38th Zimbabwe Defence Forces Day.

This day was set aside by the Government at independence, in 1980, to recognize and appreciate the critical role played by our Defence Forces in maintaining peace and tranquillity, as well as in safeguarding national security and territorial integrity.

Our country has, since Independence, remained as one of the most peaceful and politically stable countries in the region. Today’s celebrations come just two weeks after the country’s crucial Harmonized General Elections.

These were held in a peaceful environment where citizens were able to exercise their democratic rights without fear or intimidation. Allow me, to extend my sincere appreciation to the whole nation for observing peace, before, during, and after these harmonized elections. This has made us proud as a nation. I am however deeply concerned with the incidents of violence that rocked the streets of Harare at the instigation of some members of the MDC Alliance leadership, which subsequently resulted in the regrettable loss of lives, injury to persons and damage to property.

On behalf of Government, and indeed on my own behalf, I would like to extend my deepest condolences to the bereaved families and relatives of the victims of the politically motivated violence. We strongly condemn these barbaric acts of violence. Let me once again state that violence and intolerance have no place in the new Zimbabwe, in our Second Republic.

We continue to call for restraint, peace and more peace throughout the country. The new dispensation has opened up the country’s democratic and economic space and demonstrated that Zimbabwe’s democracy has matured. This, however, should never be abused. Let us bury our political differences and focus on rebuilding a prosperous Zimbabwe as one family.

Distinguished guests, comrades and friends; as Commander-in-Chief of the Zimbabwe Defence Forces, I am honoured to share this joyous day with you our Defence Forces. You have indeed remained a source of inspiration and national pride throughout the thirty-eight years of existence and operations. While you have maintained peace and security in this country, at the same time you have contributed to global peace, security and harmony through your involvement in regional and international peace-keeping missions.

As part of the constitutionally enshrined mandate outlined in Section 212 of our Constitution, the Defence Forces will continue to protect Zimbabwe, its people, its national security, interests and territorial integrity. Furthermore, our Defence Forces have supported other sister security forces like the Zimbabwe Republic Police, in curbing the economic haemorrhaging

Distinguished guests; comrades and friends; we applaud the Defence Forces for the various corporate social responsibility activities and programmes which has seen the ZDF providing civil assistance to ministries in all the country’s ten provinces, as well as various community projects. These projects included construction of school classroom blocks, clinics, hospitals and bridges, among other infrastructure developments. In addition, our Zimbabwe Defence Forces, in conjunction with the Civil Protection Unit, also offered aid by providing logistical, food and medical assistance to victims of natural disasters especially in the country’s flood-prone low lying areas.To this end, our Forces continue to showcase that they are a people’s force and committed to serve the nation.

In fulfilment of their obligations, various training and development programmes are being conducted for ZDF members at various training institutions around the country. Only on Friday, I officiated at the Zimbabwe National Defence University’s Sixth Graduation Ceremony of the National Defence Course 06/2017 which saw students graduating after acquiring requisite tools to address today’s contemporary national defence and security strategic challenges and opportunities.

This has significantly transformed our forces as major contributors to international peace and stability. In thisregard, our officers have earned excellent international reputation, goodwill and confidence throughout theworld. Several officers are currently deployed in Ethiopia, Lesotho, Somalia, South Sudan, and at the UN Headquarters. We are indeed proud that our Forces continue to raise the Zimbabwean flag high through demonstration of professionalism, intelligence and diligence, wherever, they are deployed.

Furthermore, the ZDF currently has a contingent of officers and men participating in the Russian International Military Games, which are being hosted by the Russian Federation, Kazakhstan, China and Belarus. International military interactions of this nature, are critical in improving the operational capabilities of the Zimbabwe Defence Forces as well as its image at the world stage. Most importantly, participation of our Forces at that level helps to sharpen their skills, while at the same time improving their professional conduct and preparedness to defend Zimbabwe. This is over and above the obvious benefit of improving bilateral and diplomatic relations between Zimbabwe and other participating countries.

Back home, my administration is committed to progressively and comprehensively addressing the Conditions of Service of our Defence Forces, inclusive of their housing needs, as the economy improves. In addition, my administration will also pay attention to the re-equipping of our Forces, whose equipment in some instances dates back to 30 years.

Ladies and gentlemen, comrades and friends; in conclusion, allow me to commend Commanders of the Zimbabwe Defence Forces for their astute leadership and guidance to our Defence Forces. To all our officers, men and women of the ZDF, I encourage you to remain resolute, and to diligently and professionally execute your mandate to protect Zimbabwe, its people, its national security, interests and territorial integrity.

Allow me to take this opportunity to thank our visitors, the members of the Malawian Defence Forces Football Team, for their presence to play against our ZDF select team, as part of our entertainment today.

With these remarks, I wish the ZDF Family and the entire nation, a memorable Defence Forces Day celebrations.