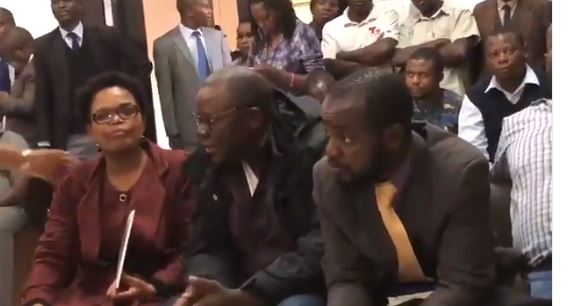 MDC Alliance principal and former minister of finance Tendai Biti was granted bail after he appeared before Harare Magistrate Francis Mapfumo at the Rotten Row Magistrates’ Court. Biti who was handed over to Zimbabwean authorities by their Zambian counterparts, in defiance of High Court order, is facing charges of contravening Section 36 of the Criminal Law Codification and Reform Act (Chapter 9:23), “public violence” and also contravening Section 66 (A)(1) of the Electoral Act (Chapter 2:13), “unofficial or false declaration of election results.”

The state which was represented by four prosecutors, Justin Uladi, Jonathan Murombedzi, Chipo Murinda and Michael Reza alleged that property worthy US$345 000 was destroyed after Biti and Jim Kunaka incited opposition supporters to burn vehicles and destroy Zanu-PF properties. However, despite the severity of the charges, the state did not oppose bail on the two charges and only asked the court to set stringent conditions. The State asked the court for the following conditions:

Magistrate Francis Mapfumo agreed and set the bail at $5 000 with the conditions. Biti was represented by Beatrice Mtetwa, Alec Muchadehama, Jeremiah Bamu, Gift Mtisi, Harrison Nkomo, among others.

Beatrice Tele Mtetwa is a Zimbabwean human rights lawyer. She is known for representing several journalists. In 2014 she was honoured among 10 extraordinary women from 10 countries presented with the US Secretary of State's International Women of Courage Award. Read More About Beatrice Mtetwa