Minister of State for Masvingo Province Josiah Hungwe is reported to have denied ever saying that President Emmerson Mnangagwa will shoot to stay in power. In May, provincial weekly publication, the Masvingo Mirror, reported Hungwe warning his audience that Mnangagwa could shoot all those who did not listen to him and want to run away. In an article titled “Mnangagwa will shoot to stay in power”, Hungwe was quoted as saying,

Do you know that I am the leader of the new dispensation here in Masvingo and I say ichi chinhu chedu chatakaita (this is our thing that we did). Our leader Mnangagwa is a soldier and you know that a soldier is always equipped with a gun to do whatever he wants. If you want to run away from him he can shoot you so you should always know that.

However, after the gunning down of six people last week, following protests from the opposition, Hungwe denied ever making the statements in question. Speaking to the Daily News, Hungwe said,

You cannot make a story out of it. It is not fair because I was not there when what you are reminding me was allegedly said, it is your creation so look for other people to talk to not me. 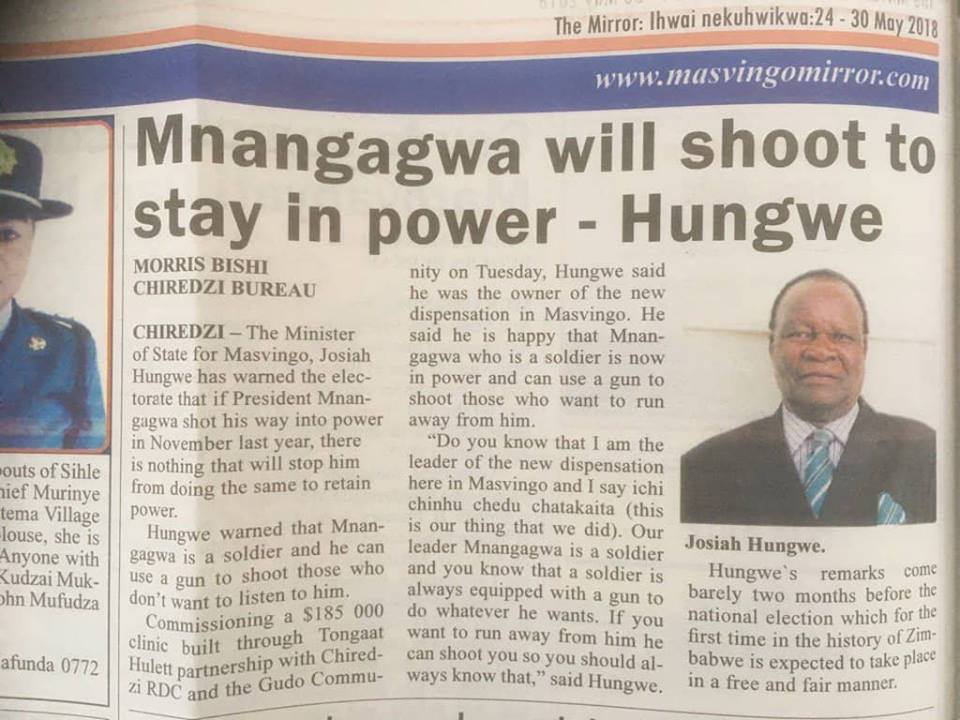 Josiah Hungwe is the fromer Minister of State for Masvingo and a member of the Zimbabwe African National Union Patriotic Front (ZANU PF) .He was appointed as the country's first ever Minister for Liaising on Psychomotor Activities in Education in 2013.He was later upgraded to... Read More About Josiah Hungwe

I Never Said Mnangagwa Will Shoot To Stay In Power: Hungwe