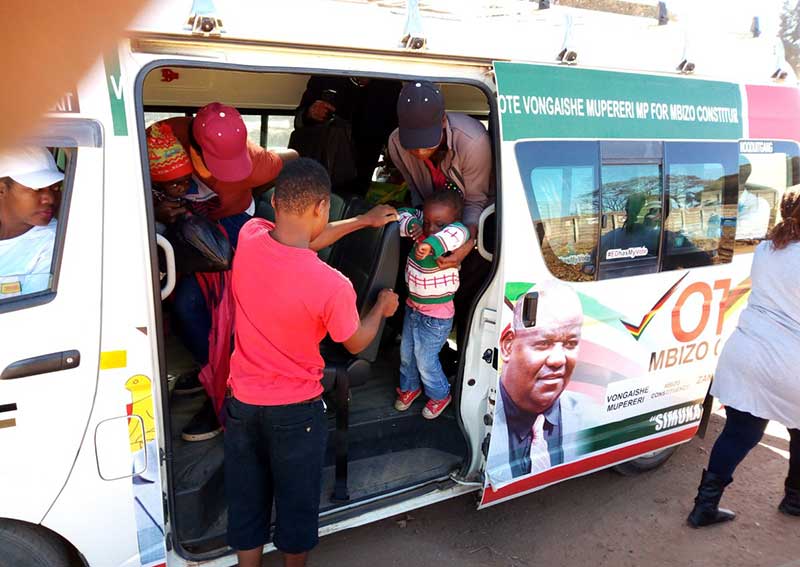 Zanu-PF’s outgoing member of parliament for Mbizo constituency, Vongaiishe Mupereri has organised free transport for people in his constituency. Mupereri has assigned his commuter omnibus to ferry people back and forth from Mbizo to the Kwekwe central business district for free. Writing on microblogging site, Twitter, Mupereri said,

My kombi shall be operating on the Mbizo Via Zimasco to town Route. It has already started. Kukwira mahara.

This follows a similar initiative but aspiring member of parliament (MP) for Budiriro, Godfrey Gomwe who hired 60 commuter omnibuses to ferry people tback and forth from Budiriro 1, 2, 4 and 5 and the central business district. The free transport programme for Budiiriro happens on select days and will run until election day. Speaking to H-Metro, Gomwe said,

We started this on Monday but we have decided that we do it on selected days. So we approached about 60 kombis that operate in Budiriro and paid them for the whole day on Monday.

It was free transport for Budiriro residents that day. But after it emerged that there were cases were passengers, who were unaware, would be asked to pay we decided to have specific days for the promotion where we would have notified all people.

Godfrey Gomwe is a Zimbabwean politician. Gomwe was the chairperson of the of the Zimbabwe African National Union Patriotic Front (ZANU-PF) Harare province youth league. He is an active member of the nationalist party and was generally viewed as a Mugabe loyalist who belonged to... Read More About Godfrey Gomwe