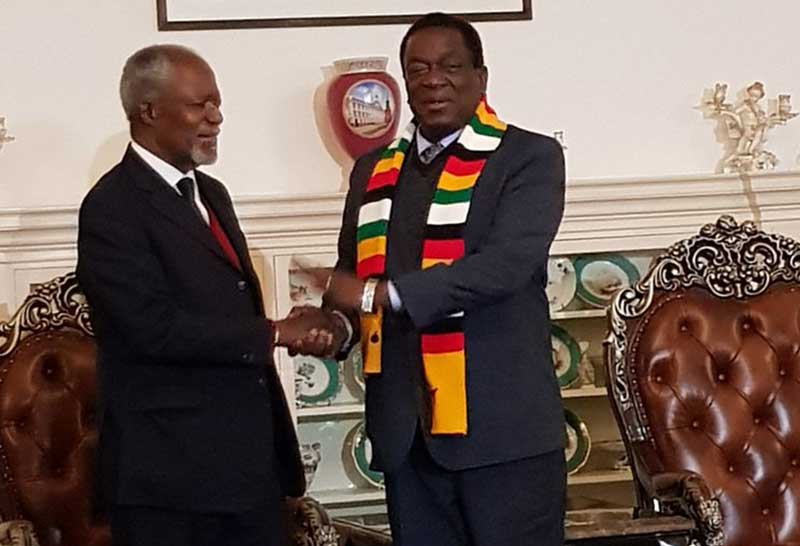 President Emmerson Mnangagwa met with The Elders delegation led by former United Nations Secretary-General Kofi Annan on Friday morning at State House. The other members of the delegation are Mary Robinson, former President of Ireland and UN High Commissioner for Human Rights, and Lakhdar Brahimi, former Foreign Minister of Algeria and UN diplomat. After the meeting which was just over an hour long, Annan refused to comment on the meeting only saying that the elders had come to encourage peaceful and credible elections.

Addressing the media after the meeting, President Emmerson Mnangagwa said that he had reassured The Elders that government was not controlling the actions of the Zimbabwe Electoral Commission. He said that Zec was independent, and encouraged those who were unhappy with its conduct to approach the courts. He said that there was peace in the country and that people were free to go about their campaigns. The only blemish on the country’s peace record was the Bulawayo explosion. Said Mnangagwa,

The incident in Bulawayo was intended to assassinate me not democracy…The government has no role in influencing Zec as an independent body. Those aggrieved with the commission are free to approach the courts. The courts are open.

After the meeting with Mnangagwa, The Elders met with MDC Alliance presidential candidate Nelson Chamisa.

Govt Has No Role Influencing Zec: Mnangagwa Tells The Elders