According to the latest Afrobarometer survey, the presidential race is now tighter as MDC Alliance presidential candidate Nelson Chamisa has closed President Emmerson Mnangagwa’s gap down to 3 percentage points. Chamisa is now projected to get 37 percent of the vote compared to Mnangagwa’s 40 percent. 20 percent of the voters refused to reveal their preferences or are still undecided about who to vote for.  A measly 3 percent confirmed that they will be voting for the rest of the 21 candidates combined. 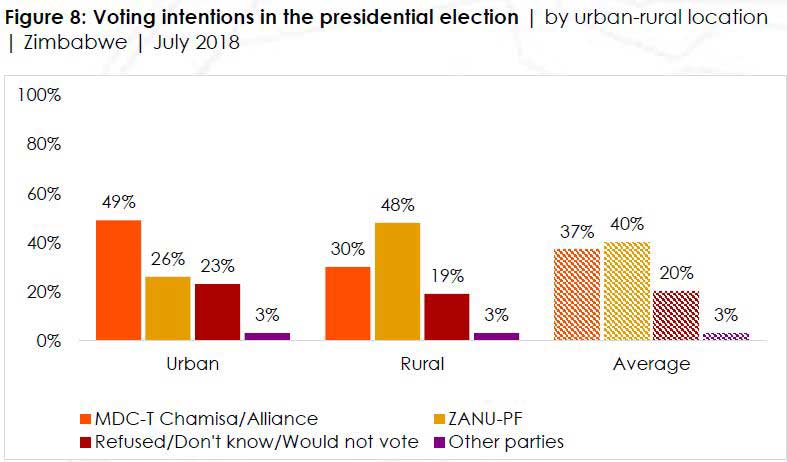 Important, too, are the 20% of citizens who did not declare a voting intention. This group is made up of the 15% who refused to answer the voting-intentions question and the 5% who said they did not know whom they would vote for.8 Yet the choices of undeclared voters at the ballot box could have a decisive effect on the outcome of the presidential election. So how might they vote? Some speculative estimates are possible, as follows:

If undeclared voters split their votes in the same proportions as declared voters (i.e. 40% for the ZANU-PF and 37% for the MDC), then we estimate that the incumbent candidate could win on the first round.

But what if, as seems more likely, undeclared voters lean toward the opposition? What proportion of these reticent citizens would have to vote for the MDC to ensure the opposition a majority of votes (50% plus one) on the first round? According to our calculation (see Box 1), the MDC would have to obtain about two-thirds (66%) of undeclared votes in order to secure a first-round victory in the presidential election. In our opinion, this prospect lies within the realm of reasonable possibility.