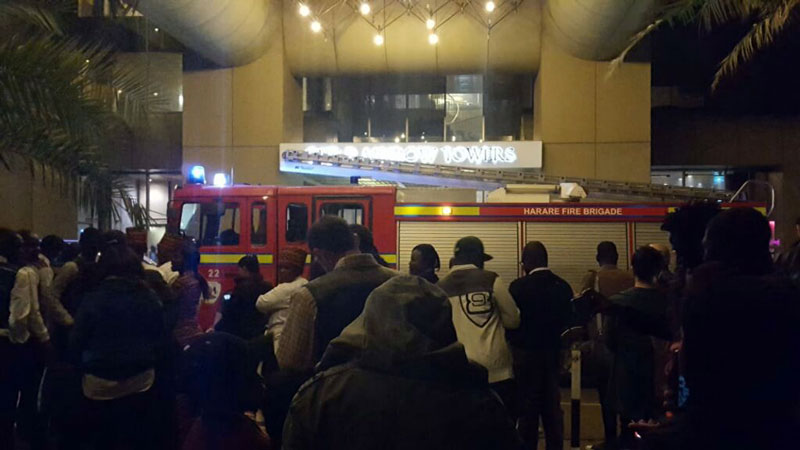 The Rainbow Tourism Group (RTG) has issued a press statement on what caused the fire at Rainbow Towers Hotel and Conference Centre in Harare on Wednesday evening. In the statement RTG says the fire occurred in one of the smaller conference rooms situated on the Mezzanine Floor of the hotel at approximately 1900 hours on the evening of 11 July 2018.

RTG said that there were no casualties nor damage to property save for small affected part of the ceiling. We publish the full press statement below:

An isolated fire incident occurred in one of the Rainbow Towers Hotel & Conference Centre smaller conference rooms situated on the Mezzanine Floor of the hotel at approximately 1900 hours on the evening of 11 July 2018. The fire was successfully contained to a small area in the ceiling of the conference room approximately 1 square meter.

The fire alarm system was immediately triggered and the Fire Brigade was called and responded timeously. All guests and staff at the hotel were evacuated in line with the fire evacuation procedure for approximately one hour until the building was deemed safe for use. Preliminary investigations by the hotel Maintenance and Engineering team indicate possibly a localised electrical fault could have caused the fire.

A thorough investigation is underway. Six guests who were in the conference room when the incident happened were quickly evacuated together with all guests and hotel staff present in the building at that time. There were no casualties nor damage to property save for small affected part of the ceiling. We thank all our guests for co-operating with the staff at the time of this isolated fire incident.