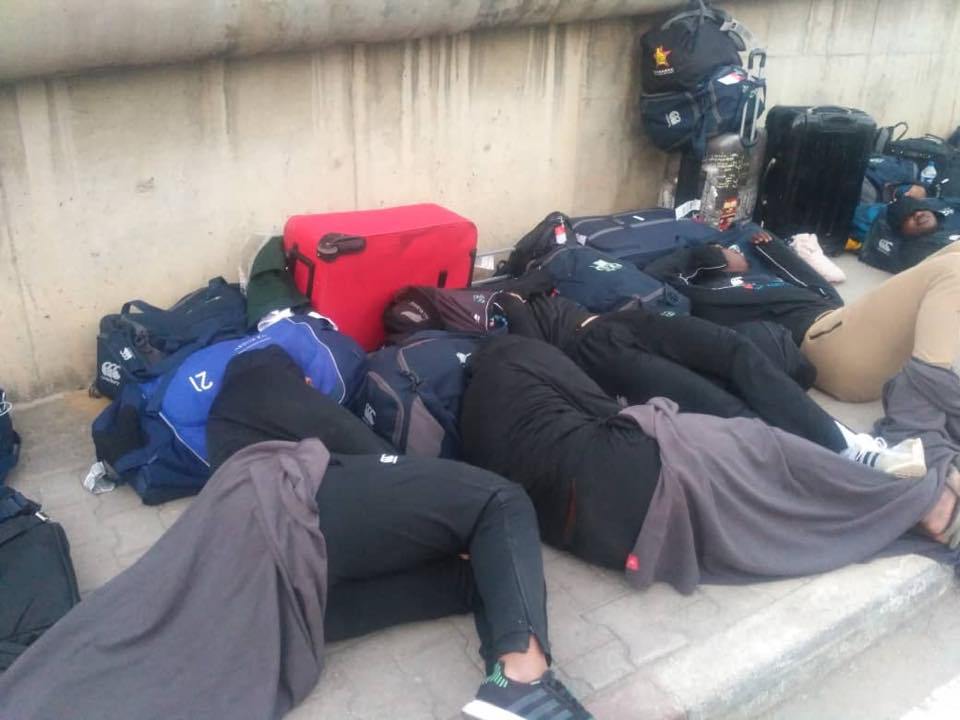 The Tunisia Rugby Union has blamed the Zimbabwe Rugby delegation for its anti-sports and anti-ethical actions. The statement comes after The Sables resorted to sleeping out in the street after they received substandard accommodation.

Tunisia alleges Zimbabwe team manager expressed reservations “about the state of the bathroom in one of the rooms, the lack of a pool and the low internet speed”, when Tunisia had provided standard accommodation in the form of a two star bed and breakfast facility. The Sables have been moved to an actual hotel. We publish the statement in full below:

As part of the policy of the Ministry of Sports and Youth Affairs, the Tunisian Federation and Word Rugby for the popularization of rugby practice and the decentralization of sports events, the Tunisian Rugby Federation decided to to organize the match of the Gold Cup (qualifier to the world cup, Japan 2019) and which should oppose the Tunisian selection to its counterpart of Zimbabwe, in the city of Beja and this on July 07, 2018.

For the organization of this event, a commission has been appointed to ensure the smooth running of this sporting event. After several visits to the meeting places and accommodation sites, after various meetings with local authorities (Governor, Mayor, Regional Commissioner for Sports …) and after study of the tournament manual and specifications, Hotel ALADINO was chosen as the accommodation of the Zimbabwe team. The hotel is near the stadium where the match will take place and meets the criteria of the specifications (a 2-star hotel and approved by the Ministry of Tourism).

The Zimbabwean delegation left the airport at around 4:00 pm leaving all the delegation’s passports to the border police to finalize the visas and thus avoid prolonging the wait, all passports were withdrawn later in the evening by a member of the delegation. the Tunisian federation and have been returned to the Zimbabwean team.

After a lunch offered by the Tunisian Federation to its guests, an air-conditioned bus transfer of members of the Zimbabwe delegation to the city of Béjà was ensured. Arrived at the hotel around 20:00, the check-in and the formalities of reception made, all the members of the delegation of Zimbabwe were entitled to a dinner, until then no problem was reported.

Around 23:00, the Zimbabwean team manager expressed reservations about the state of the bathroom in one of the rooms, the lack of a pool and the low internet speed. So, he started talking about leaving the hotel on the pretext that he is not decent.

The quick intervention of the president and three members of the organizing committee was not enough to calm him down and convince him to spend the rest of the night at the hotel, ensuring that he found solutions the next morning with the possibility to change hotels. Alas, he asked all the members of the delegation to take out their luggage, leave the hotel and spend the night outside on the ground. Unfortunately, local officials have tried with this head of delegation but without issues.

At 6:30 in the morning; and after the efforts and interventions of the organizing committee and members of the Tunisian federation, the Zimbabwe team was transferred to the ALRAWABI hotel in Nefza ( facebook.com/pg/hotel.alrawabi ) where they issued their satisfaction with an apology to the president of the organizing commission.

However, the Tunisian Rugby Federation expresses its deep regret for all that has happened and strongly deplores the anti-sports and anti-ethical actions of the Zimbabwean delegation which do not reflect the strong ties of friendship between the two countries.

It confirms through this communiqué that Tunisia is, and will always be, a country of hospitality and hospitality, something that it has always proved and that will do and will make its pride.