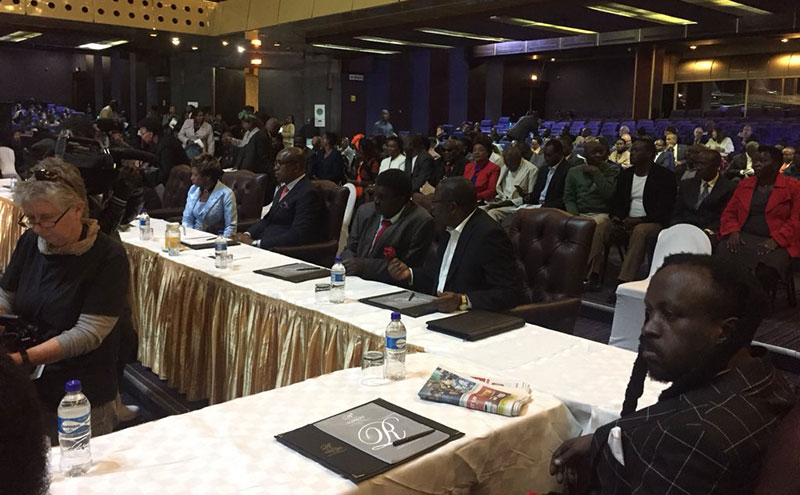 Leaders and representatives of Zimbabwe’s political parties in parliament and presidential candidates signed a peace pledge ahead of 30 July 30 harmonized elections. The event which was facilitated by the National Peace and Reconciliation Commission (NPRC) started with a moment of silence to honour the victims of the explosion at White City Stadium in Bulawayo. NPRC chairperson Justice Sello Nare stressed that violence was a choice which should always be avoided.

Dr Francis Danha of the #1980Movement disrupted the Zimbabwe Electoral Commission (Zec) Multi-Party Meeting on Friday had to be ejected from the meeting after he became disorderly again. He was dragged out by the police kicking and screaming. Dr Danha was arrested by the police after being dragged out of the Peace Pledge signing ceremony.

Here is the pledge which was signed by the parties:

AS A PARTICIPANT IN THE 2018 ELECTIONS I SAY:

1. No to violence, force or intimidation

2. No to hate speech and inducing fear

3. Yes to freedom to campaign and canvas

4. Yes to freedom of expression and equal access to media

5. Yes to freedom to choose a candidate and to vote in secret

6. Yes to full and equal participation of women

7. Yes to promoting a culture of peace and tolerance

ZIMBABWE’S CODE OF CONDUCT, OUR GATEWAY TO A PEACEFUL AND PROSPEROUS NATION.