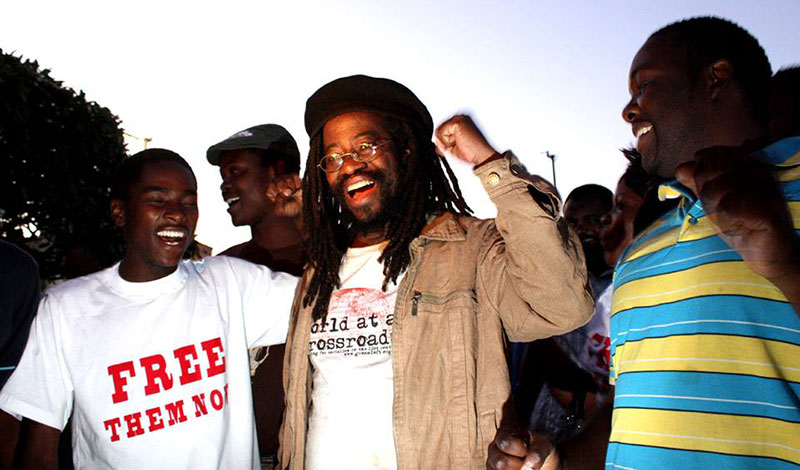 High Court judges Justice Charles Hungwe and Justice Neville Wamambo have overturned the conviction and sentence of 6 democracy campaigners, led by Munyaradzi Gwisai. The six were arrested in 2011 and charged with conspiracy to incite public violence. The six were alleged to have plotted protest against former president Robert Mugabe. According to Zimbabwe Lawyers for Human Rights who represented them,

The six pro-democracy campaigners who include University of Zimbabwe lecturer, Munyaradzi Gwisai, Hopewell Gumbo, Antonater Choto, Tatenda Mombeyarara, Edson Chakuma, and Welcome Zimuto were convicted in March 2012 by Harare Magistrate Kudakwashe Jarabini and sentenced to serve two years in jail, but the sentence was suspended for five years.

During trial, prosecutors claimed that Gwisai, Gumbo, Choto, Mombeyarara, Chakuma and Zimuto conspired to commit public violence as defined in section 188 as read with section 36 of the Criminal Law (Codification and Reform) Act, after they were arrested in Harare while watching video footage of the Arab Spring uprisings.

This compelled their lawyer Alec Muchadehama of Zimbabwe Lawyers for Human Rights to file an appeal in the High Court against both conviction and sentence for conspiring to commit public violence. On Tuesday 12 June 2018, High Court Judges Justice Charles Hungwe and Justice Neville Wamambo upheld the pro-democracy activists’ appeal, whose determination had been pending for six years…The pro-democracy campaigners were arrested at a time when the Arab spring citizens embarked on mass uprisings to topple their governments which they accused of trampling on their rights and looting state resources.