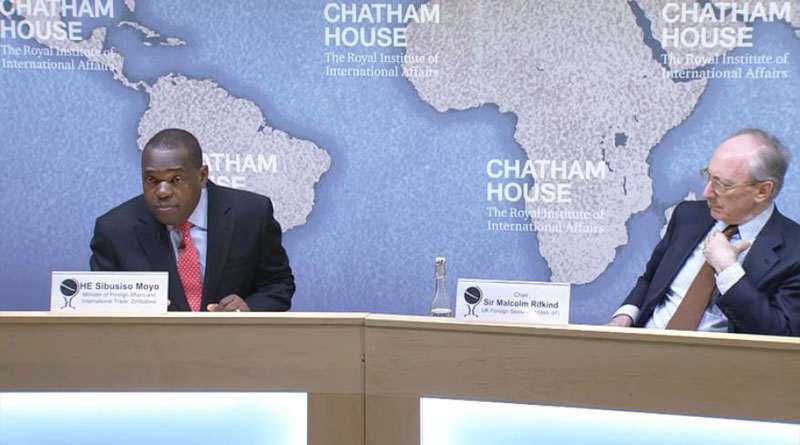 Minister of Foreign Affairs and International Trade, Lieutenant-General (retired) Sibusiso Busi (S.B) Moyo has said that President Emmerson Mnangagwa is prepared to step down if he is to lose the 2018 presidential elections to MDC-T leader Nelson Chamisa or any other opposition candidate. Minister Moyo made the revelation at Chatham House in the United Kingdom, where he was speaking on the government’s plans for re-engagement and renewal of Zimbabwe’s international economic relations.

A member of the audience asked Moyo, what would happen if Chamisa or any another candidate pulled off a shock win like United States President Donald Trump did in November 2016. After laughing heartily at the prospect, the Minister replied that the new thinking in Mnangagwa’s government was that national interests had to be prioritised above everything else. He said that political contests should come second to national interests and as a result if Mnangagwa loses he would step down for the good of the country. Said Moyo

The Minister was also asked to explain if President Emmerson Mnangagwa’s pledge to uphold democracy was sincere. The woman who asked the question said that when giving a speech last year, Mnangagwa spoke of unity in English but when he spoke in vernacular, he said that the Zanu-PF train would continue going relentlessly while the opposition just continues barking like dogs.

Moyo explained Mnangagwa’s words saying that the president was a person who always listened to good ideas, particularly from the opposition. He added that Mnangagwa was not afraid to implement good ideas, even if they originated from the opposition. Because of this willingness to implement new ideas, all the good things would come from Zanu-PF and as a result, the party would never be voted out of office.

3 comments on “Mnangagwa Is Prepared To Step Down If He Loses 2018 Elections: S.B. Moyo”