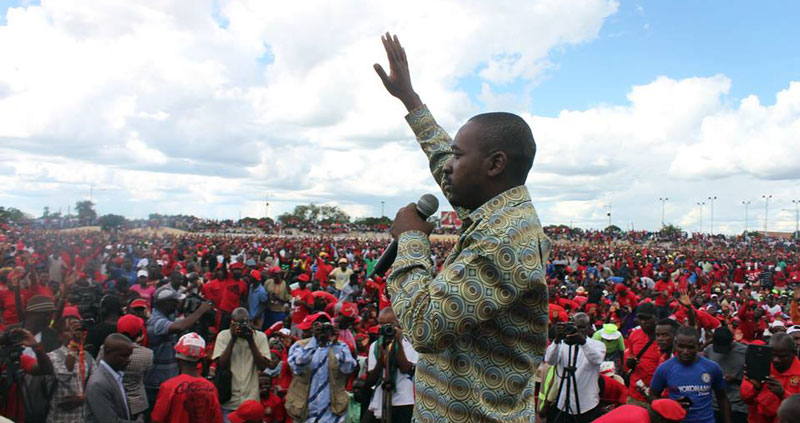 Zimbabwe did not come cheap. It took a protracted and grueling struggle to liberate the country from the shackles of colonial bondage. The patriotic sons and daughters of this land died while some were raped or maimed in the selfless national duty to liberate this country.

Today, we remember them.

Today, we salute the heroic struggle of the people of Zimbabwe in consigning that dark epoch to the dustbins of history.

Today, we mark the advent of our political independence and the stoic gallantry that it took to restore the dignity of the black Zimbabwean.

Today, we stand with pride as a heroic people who took up arms to fight oppression.

Indeed, we are a nation of heroes.

Our mission: Completing the unfinished business

As a new generation and as a post-liberation political formation, our mandate and our mission is to be the compass of that struggle by ensuring that the people‘s aspirations are fulfilled.

We so much cherish the aspirational and inspirational values of the liberation struggle to the extent that we take great exception if those sacred values are betrayed or dismembered. At the core of that liberation was the legitimate demand for one-man-one vote and that is why we are pressing for the sovereign expression of the will of the people through a free, fair and credible election.

Our call for electoral reforms is very much attached to the core value of the liberation struggle which was the right to vote.

I wish to restate that our generation’s struggle for democracy stands on the shoulders of the earlier struggle of liberation. As a nation, we liberated ourselves so that we could truly be free in every respect. Therefore our democratic struggle represents our avowed wish to complete the agenda of the liberation struggle and not to negate it!

We only wish to complete the unfinished business of that sacred struggle that we commemorate on this Independence Day. So great was the meaning of that expression that we feel a day is not enough for a nation’s full expression. That is why as a party we in the MDC-T have declared this April to be an independence month. A day’s celebration is an understatement of the significance of independence in our nation’s history. In the truly new dispensation that begins after the next election; we will remain committed to an Independence month and not a mere independence day. We will commit a whole month to the truly convivial and carnival celebration of the heroism of the people of this land in fighting tyranny and oppression.

It is belittling of this great day to give the impression that our liberation was fought for a single political party. It was a truly national liberation that must appeal to the kaleidoscopic and full variety of our political milieu!

All the leaders and members of the MDC-T will be attending today’s independence celebrations in the various areas where they will be taking place. In my case, I will be joining other national leaders in giving this day its true meaning and value. It is a great day that deserves to be commemorated by all of us.

A tribute to the people of Zimbabwe

I would want to use this public holiday to pay tribute to the honest and hard working people of Zimbabwe who are slugging it out under very difficult circumstances.

The totality of Zimbabweans must be respected and thanked because it is them who fought the liberation struggle. All Zimbabweans deserve respect, including war veterans, dead and alive, war collaborators, ex-detainees and those who were in their fathers’ loins and in their mothers’ wombs.

We pay tribute to SMEs for sustaining Zimbabweans in the face of brutal mismanagement of the country. We say thank you to the nurses, doctors, teachers, and all civil servants, those serving in defence, in the police, intelligence and in correctional services. Thank you for working under very difficult circumstances.

We say thank you to all those in the diplomatic corps, in the various government ministries and to all Zimbabwean students in and outside the country.

We want to call for discipline, accountability, transparency and uprightness.

We want to thank all religious leaders and congregants for sustaining the moral fabric and dignity of the people. Thank you to all Diasporans, to small scale entrepreneurs, petrol attendants, gardeners, commuter omnibus drivers and their assistants all of whom are often forgotten about.

Soon—and very soon–we will be unveiling a robust policy programme that will address all the challenges that you face.