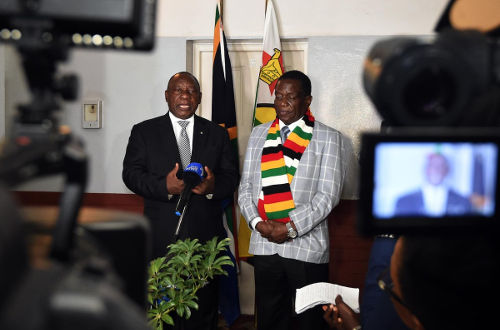 On his visit to Zimbabwe yesterday, President of South Africa, Cyril Ramaphosa spoke at length on the land question in South Africa.

Speaking to journalists after meeting Emmerson Mnangagwa, he said:

It was a courtesy call but we used the opportunity to have a number of discussions on various issues; issues that have to do with challenges we are facing in the region, mostly economic challenges, and we reaffirmed our willingness to work together, to improve and grow the economies of our two respective countries.

So, this was a great opportunity to confirm that South Africa and Zimbabwe are joined at the hip and will find clever ways of growing our economies and co-operate on matters of trade, matters of finding various projects that we can work together on.

Patience is that which really helped us to get where we are. We have managed to transition our way into where we are today, this is a new dawn in South Africa,

We as South Africa are going through an extensive debate on the issue of land. The ANC Conference, as you well know, took a decision at its 54th Conference, and the matter was also resolved in our Parliament. Those two decisions have since ignited very rich and engaging dialogue.

“On how we can deal with the issue of land, we are also going to be looking at those in the region and in the world who have dealt with the question of land and how best they have done so.

“We are going to be drawing some examples and some lessons from Zimbabwe and a number of other countries. Our debate and discussion is going to continue until it matures to a very firm position which will then be adopted by our national Parliament.

“We are involved in a very enriching process of debating the matter, like we did as we moved to end apartheid. Discussions to end apartheid were extensive and rich which ended with a very good outcome and likewise on land, I think we will end with a good outcome.”