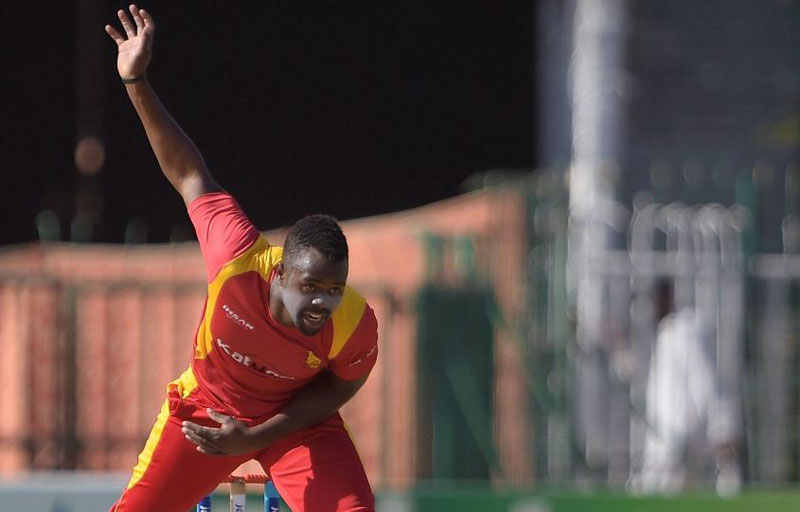 Zimbabwe’s bowler Brian Vitori has been banned by the International Cricket Council (ICC) from bowling in international cricket with immediate effect. Vitori bowled the last over and took the last wicket which enabled Zimbabwe to beat Afghanistan by two runs in an ICC Cricket World Cup Qualifier in Bulawayo. In a media release, the ICC said,

The 28-year-old was reported by the match officials following his side’s non-broadcast match against Nepal on Sunday.

Zimbabwe’s Brian Vitori has been suspended from bowling in international cricket with immediate effect after the Event Panel of the ICC Cricket World Cup Qualifier 2018 confirmed that the left-arm fast bowler uses an illegal bowling action.

The 28-year-old was reported by the match officials following his side’s non-broadcast match against Nepal on Sunday.

As per Article 3.6.2 of the ICC Illegal Bowling Regulations, Vitori’s bowling action was filmed in the next match he played after being reported, which was against Afghanistan on Tuesday, and the video footage of his bowling spells were provided to the Event Panel of Helen Bayne and Mark King, who are both members of the ICC Panel of Human Movement Specialists, for analysis and assessment.

Following its review, the Event Panel concluded that Vitori employs an illegal bowling action, and, as such, in accordance with Article 6.5 of the regulations, he has been immediately suspended from bowling in international cricket.

Ngarava is a left-arm fast bowler and a lower-order batsman, who has played in six ODIs, taking eight wickets and scoring 12 runs. His last ODI for Zimbabwe was against Scotland in Edinburgh in June 2017.