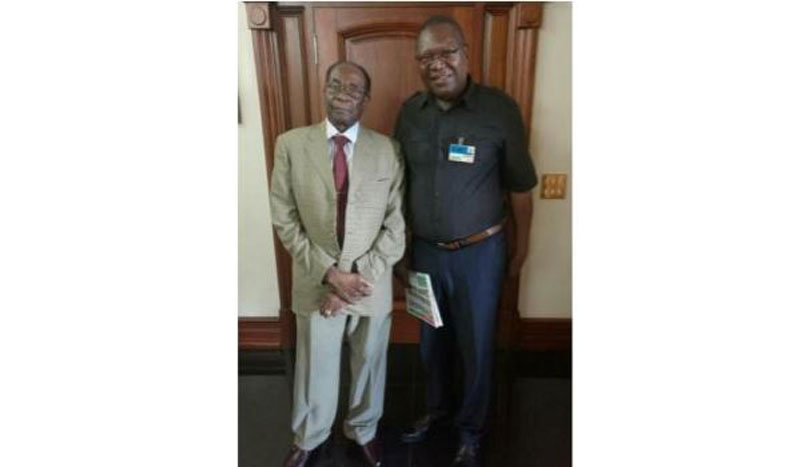 Brigadier General (Retired) Ambrose Mutinhiri has been confirmed as the leader of the New Patriotic Front (NPF). The NPF made waves when it submitted a petition to the African Union (AU) and Southern African Development Community (SADC) denouncing the November 2017 Military Intervention as a coup against former president Robert Mugabe.  Mutinhiri himself recently quit Zanu-PF arguing that he cannot be part of a “coup” government.

Harare-5 March 2018- Retired Brigadier General Ambrose Mutinhiri, who resigned from Parliament and Zanu PF last Friday over the unconstitutionality of the military coup that illegally imposed Emmerson Mnangagwa as President of Zimbabwe and led to the Army’s usurpation of the power and authority of civilian institutions including Zanu PF, paid a courtesy call on President Robert Mugabe at his Harare Blue Roof residence yesterday 4 March 2017.

Cde Mutinhiri is the Founding President and Presidential Candidate of the National Patriotic Front (NPF), whose formation was initiated on 19 November 2017 in direct response to the military coup four days earlier, and has come into fruition following an extensive private and public consultation process by its founding members.

The purpose of the courtesy call was to appraise. President Mugabe of Cde Mutinhiri’s bold and inspiring resignation as well as to thank the President for having afforded Cde Mutinhiri a cherished opportunity to work with and under him in various national capacities.

Cde Mutinhiri especially thanked President Mugabe for laying a solid and irreversible ground for generational renewal in Parliament and government through progressive policies that have empowered the youth who are now poised for unstoppable leadership roles across the political divide and in business, civil society and churches.

Cde Mutinhiri also took the opportunity to inform President Mugabe of the formation of the NPF by a cross-section of Zimbabweans including but not limited to Zanu PF members who are outraged by the unconstitutional and humiliating manner in which President Mugabe was criminally ousted from the leadership of both Zanu PF and the country by real criminals who have shamelessly damaged Zimbabwe’s fledgling constitutional democracy and dented the professional reputation of the Zimbabwe Defence Forces.

Cde Mutinhiri told President Mugabe that the result of all this is that there’s no constitutional order in Zimbabwe today and that the government created by the coup is unlawful and illegitimate at national and international law and that, for these reasons, the NPF is approaching the Constitutional Court in Zimbabwe as well as appropriate regional, continental and international bodies to ensure the return to constitutional order and legitimacy in the country and to facilitate justice for the victims of the military coup who are currently helplessly in limbo.

Cde Mutinhiri informed President Mugabe that consultations to form the NPF started on 19 November 2017 after the illegal meeting of the Zanu PF Central Committee that purported to recall President Mugabe from his position as President and First Secretary of Zanu PF and which unlawfully “ordered” him to resign as Head of State and Government and Commander-in-Chief of the Zimbabwe Defence Forces failure of which he would be subjected to a Kangaroo impeachment process in flagrant violation of the constitution of Zanu PF constitution and the Constitution of Zimbabwe. Cde Mutinhiri told President Mugabe that he is proud that he did not attend the illegal Zanu PF Central Committee on 19 November 2017 nor the attempted illegal “impeachment” sitting of Parliament on 21 November 2017. In that vein, Cde Mutinhiri revealed to President Mugabe that the ill-fated impeachment motion would not have passed in the two thirds vote-threshold by secret ballot because at least 50 ZANU PF MPs had secretly caucused to vote against it.

On the prospects of NPF, Cde Mutinhiri told President Mugabe following extensive consultations that have been going on since 19 November 2017, he can say with absolute certainty that out of every three Zanu PF members; at least two are solid NPF while the remainder are still hedging their bets, waiting to see where the wind is blowing.

In his response, President Mugabe congratulated Cde Mutinhiri for taking a bold move and said that Zimbabwe needed men and women of principle who should fight to preserve the legacy of the liberation struggle legacy. He said he hopes NPF and its supporters will be “honest upholders of the legacy of the liberation struggle and condemn the brutality against the people that is being witnessed under the military junta”. President Mugabe said that as Zimbabwe prepares for elections, “everyone should fight to ensure that people are free to belong to parties of their choice and that there is no interference by the Army or those that would want to resort to violence as a means of getting votes.”

The President also urged Cde Mutinhiri to work closely with the full spectrum of the youths to enable them to take-over the governance of the country in the interest of generational renewal whose time has come. “I hope your NPF party will empower the youths to takeover. Don’t oppress them; make sure they are not harassed. I know they will be harassed and some arrested but empower them mentally to fight for what is right,” he said.

Cde Mutinhiri promised President Mugabe that NPF will uphold the values and democratic ideals of the liberation struggle, especially the preservation of the historic land reform that Emmerson Mnangagwa says the Junta controlled Zanu PF is reversing along with youth empowerment policies.

“We are saddened, Cde President, that the so-called New Dispensation is taking away farms from black farmers who have been resettled and handing them over to former white farmers. Mashonaland East Province has been leading in these reversals. I have been made to understand that the widow of the late Cde Chenjerai Hunzvi is among those whose farms have been targeted by the coup government for repossession and reallocation to returning white farmers.

In the past, State media has alleged that the New Patriotic Front (NPF) was a project of the G40 Faction and a brainchild of former president Robert Mugabe.

This is a developing story and will be updated as we receive more details.