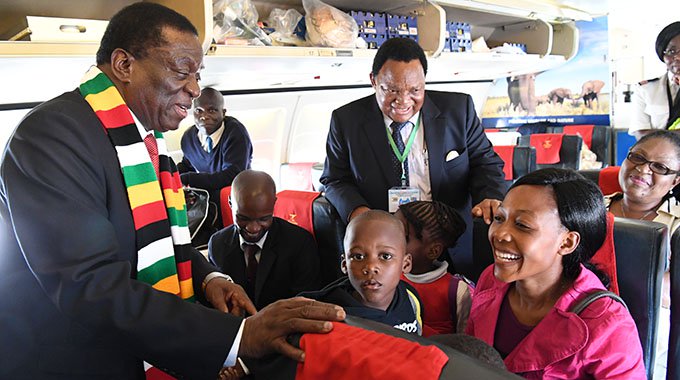 President Emmerson Mnangagwa assisted a Zimbabwean woman Blessing Kapora (28) and her three children who had been stranded in the Democratic Republic of Congo (DRC) to travel back to Zimbabwe.

Kapora and her children a girl and two boys aged 8, 6 and 5, returned home on the same plane with President Mnangagwa and his delegation. Mnangagwa who was told of Kapora’s predicament on his arrival in DRC on Tuesday agreed to travel with her back home. Kapora left Zimbabwe for South Africa after completing her Ordinary Levels at Seke 2 High School in Harare in 2008. While in South Africa she fell in love with a Congolese man, now 36 years old, with whom she had three children.

Kapora said she and her husband went to live in DRC when they lost their jobs in 2013. Her husband decided to go back to South Africa in 2017 to find a job but was met with challenges. In the same year, she called her relatives in Zimbabwe and expressed her wish to come return but they could not assist. She was advised to go to the embassy and ask for assistance to go back home. She was told that they had no money to send her home. Kapora said she never lost hope and kept contacting the embassy until Sunday when she was called to the embassy.