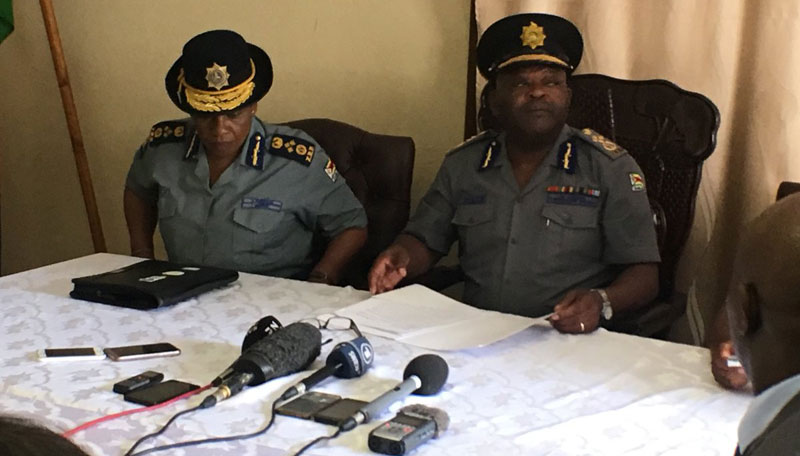 The Commissioner General of the Zimbabwe Republic Police (ZRP) Godwin Matanga has confirmed that two people were indeed shot and killed by police officers last night. Matanga expressed his regret at the two deaths and conveyed his condolences to the families of the affected. Matanga said that three officers were injured during the protests and revealed that an investigation has already been launched.

It is with a heavy heart and sadness that I wish to announce the death of two people in a very unfortunate and regrettable incident that occurred on the 22nd February 2018 in Harare Central Business District. I wish to express my sincere condolences on behalf of the Zimbabwe Republic Police and my own behalf to the bereaved families and relatives who lost their loved ones.

From the onset, let me categorically state that the Zimbabwe Republic Police is currently ceased with this matter and I have since directed a team of expert investigators to extensively establish the cause, what transpired, who was responsible and action will be taken. These investigations will leave no stone unturned, perpetrators will be brought to book and there are no sacred cows. Violence in whatever form is not tolerated.

Now for the brief details of what happened the incident is a culmination of an operation code-named Cleanup Harare Central Business District, which was being conducted by the City of Harare. The police and other security agencies were supporting the Municipality of Harare to decongest the city centre of commuter omnibuses and mushikashika.

At around 1730 hours a press statement was issued by the Ministry of Local Government, Public Works and National Housing, directing that the operation should be stopped. As the directive was given, the police and other security agencies were still in the middle of the operation enforcing the ban and unaware of the cancellation. A team of police officers from Harare Central was confronted by an angry mob armed with stones, concrete pillars and rods. The crowd started to throw stones at the police officers whilst demanding to know why they had earlier on dispersed them along- Harare Municipal Police.

The crowd advanced throwing aggressively towards the police stones and then police officers fired warning shots. The mob was not deterred. It was at this stage that the police officers fired shots that unfortunately killed two people and injured four others. In the ensuing violence, three police officers were seriously injured, a police vehicle was severely damaged and two others were burnt, several were stoned and property worth thousands of dollars was extensively destroyed.

Meanwhile, the bodies of the deceased are at Parirenyatwa Hospital Mortuary. We are appealing for information that may lead to their identification since they did not carry any identity particulars. The Zimbabwe Republic Police is appealing for peace, restraint and cooperation from members of the public as we conduct comprehensive enquiries into this regrettable and tragic incident.

We are therefore appealing for calmness in Harare as we deal with this issue. However, let me emphasise that we will deal decisively with those who continue to engage in acts of violence.