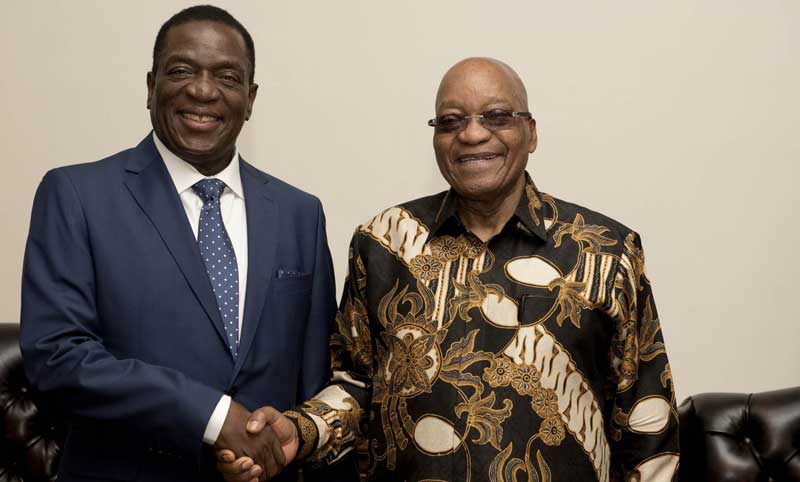 President Jacob Zuma and President Emmerson Mnangagwa of Zimbabwe have undertaken to strengthen economic trade and cooperation between South Africa and Zimbabwe.

President Mnangagwa is on his first working to South Africa after his inauguration on 24 November 2017, which is also his first official visit outside of Zimbabwe since his assumption of office.

The two leaders share a warm history of having worked together while in exile in Mozambique, in their erstwhile responsibilities for intelligence and security services for the ANC and ZANU-PF respectively.

The two Presidents emphasised the warm historical relations between the two countries and neighbours and the need to ensure the further deepening of these relations.

The two Heads of State agreed on the need to strengthen economic cooperation and expand economic and trade relations between the two countries, and to make this a key feature of the South Africa-Zimbabwe Binational Commission agenda, in support of President Mnangagwa’s mission to revive the Zimbabwean economy which has been hit by sanctions and other challenges over many years.

The two leaders also agreed to keep in close contact on an ongoing basis to share ideas as neighbours on political issues as well as regional, continental and international issues affecting their two countries and the continent.

The Zimbabwean President congratulated President Zuma and the ruling party on the successful national conference of the governing party the ANC, and extended his good wishes to the new President of the ANC, Mr Cyril Ramaphosa who is also the Deputy President of the Republic.

President congratulated President Mnangagwa on the successful congress of the Zimbabwean governing party, ZANU-PF and on his election as President of the organisation.

More: The Presidency of The Republic of South Africa