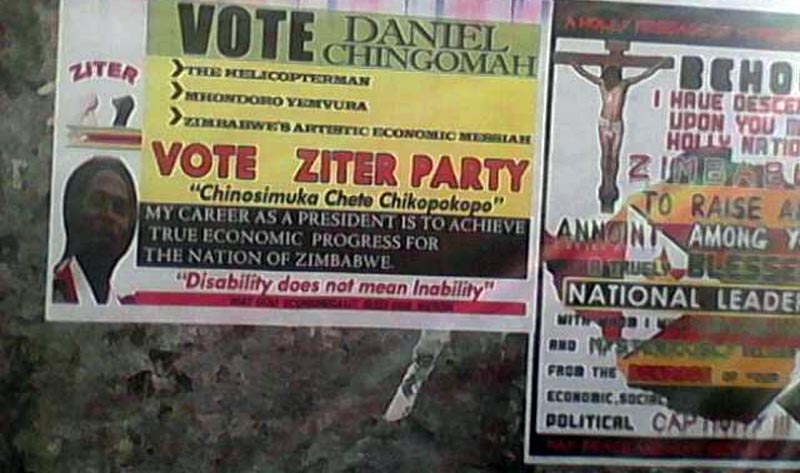 It seems musician and inventor, Daniel Chingoma will challenge President Emmerson Mnangagwa in the 2018 elections judging from the campaign posters. Chingoma is calling himself Zimbabwe’s economic messiah”.

Chingoma will run under the Zimbabwe Industrial and Technological Revolutionary (ZITER) Party which he formed in 2010. His posters were exclusively put up in public toilets because everyone uses the toilet. He is the founding director of Taisek Engineering (PVT) Ltd and is known for making a helicopter named the Zimcopter which was barred from flying by the Civil Aviation Authority of Zimbabwe.

When asked in an interview by The Sunday Mail on why he formed the political party Chingoma had this to say:

I formed that party for fun. I was merely testing the waters. I was not serious and by the way, I never registered the party with the Zimbabwe Electoral Commission.

Chingoma said his wife, Edna, was the only other member of his party. It remains to be seen if Chingoma will seriously run for President.

In 2010, Chingoma and his wife Edna were convicted and sentenced to 18 months in jail for fraud after they failed to drill a borehole for a client who had paid them to do so.

One Comment on “Musician, Daniel Chingoma To Challenge Mnangagwa in 2018?”