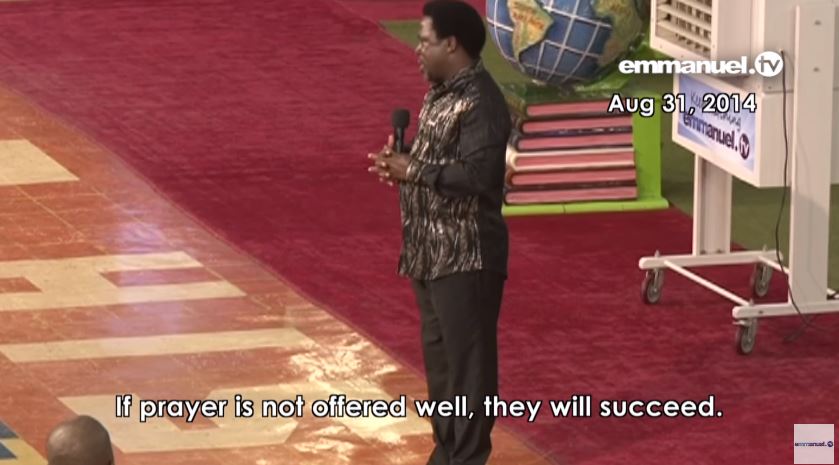 A raw, unedited version of his prediction went viral on social media after the Zimbabwean military toppled Robert Mugabe from power on Tuesday 14th November 2017 in a bloodless coup.

“I am seeing military – they are interested in embarrassing a President,” Joshua is heard saying in the clip dated Sunday 31st August 2014.

“They are still on in that plan – to kidnap either a President, Vice President or First Lady of that nation,” the cleric continued, specifying that prayers should be offered for Southern Africa.

“They want to kidnap him and if he refuses, they will kill him… God showed me the place but I don’t want to put any country into pandemonium.”

Online reactions to Joshua’s prophecy have been varied, with some hailing the cleric, others denouncing the prediction as a ‘lucky guess’ and still more suspecting the cleric had ‘inside information’ on the military’s plans.

“I’m waking up to a world where a TB Joshua prophecy has come true. Kill me now,” wrote CynicHarare on Twitter, a notable critic of Joshua on social media.

Zimbabwean media mogul Trevor Ncube acknowledged Joshua’s proclamation. “Yes, I saw that prophecy from TB Joshua,” he told a follower on Twitter. “What a true prophecy!”

The clip has raked up thousands of views since it was published in the early hours of Thursday 16th November 2017.

“This prophet is sharp in the spirit; even a plot was shown to him three years ago,” wrote one of Joshua’s followers on YouTube.

The situation in Zimbabwe remains tense with reports stating Mugabe, currently under house arrest, is refusing to co-operate with the military’s insistence that he relinquish power and hand over to his former Vice President Emmerson Mnangagwa.