After almost a week of no activity at all, Professor Jonathan Moyo’s Twitter account went active today. And the account claims that Professor Moyo and more than 50 of his fellow G40 companions are actually outside the country and relatively safe, contrary to media reports that they were arrested by the Zimbabwe Defence Forces in the military takeover which took place last week.  The account was last active on Tuesday 14, November.  The military takeover was later on that night.  The military said that is was targeting criminals around President Mugabe and according to reports, Jonathan Moyo, Saviour Kasukuwe, and Ignatius Chombo were all arrested and in military custody.

We are unable to verify that it is Jonathan Moyo himself who tweeted this message, as other people could be running the account on his behalf. It could also mean that someone else is in control of Moyo’s phone or laptop.

However, in the event that the Tweet came from Moyo himself, then it would raise a lot of serious questions about the events which have occured since the military takeover.

In these difficult & trying times that have been thrust upon our country, I wish to advise concerned family & friends that I’m relatively fine outside the country as are ministers Kasukuwere, Zhuwao, Hlongwane, Zhanda plus at least 50 others who include MPs & Zanu PF officials!

Update:   Shortly after we published the article, the Tweet was deleted.  However, we had managed to take a screenshot. 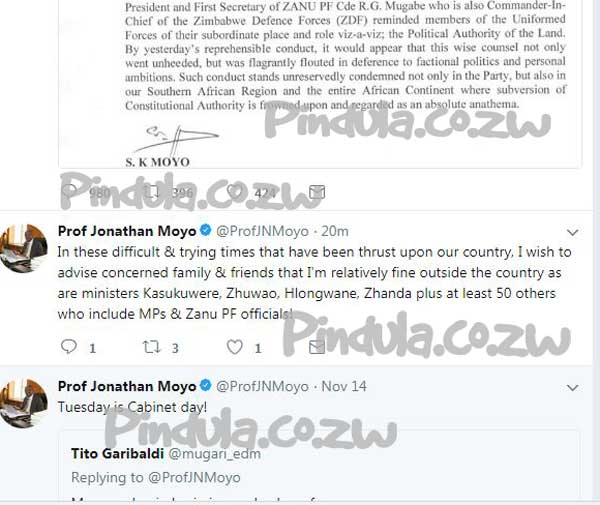