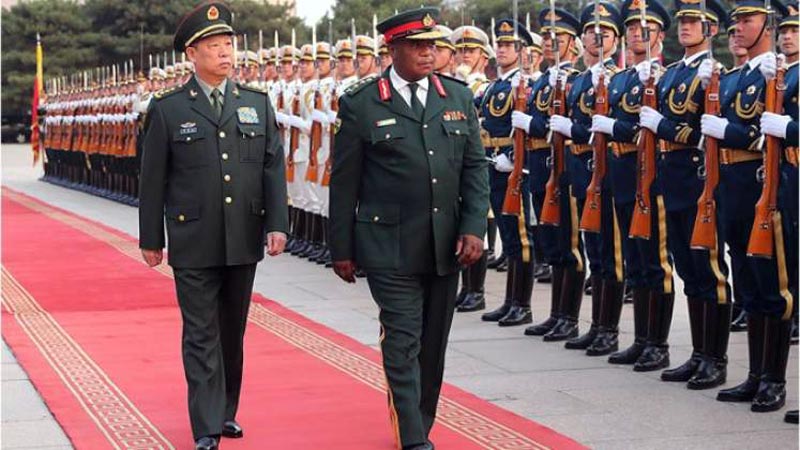 On Wednesday, China’s Foreign Ministry said that Zimbabwe Defence Forces Commander Constantino Chiwenga’s visit was a normal military exchange mutually agreed upon by China and Zimbabwe. This comes after the military took control targeting “criminals” around President Robert Mugabe but gave assurances on national television that the 93-year-old leader and his family were “safe and sound”.

General Chiwenga met Chinese Defence Minister Chang Wanquan in Beijing on Friday. Chang expressed a willingness to promote relations with Zimbabwe. The Chinese ministry showed a picture of Chiwenga and Chang, both wearing military uniform, shaking hands, and another picture of the two sitting opposite each other holding a meeting at the People’s Liberation Army headquarters in Beijing.

I can only tell you that his visit to China this time was a normal military exchange mutually agreed upon by China and Zimbabwe. As a country that is friendly with Zimbabwe, we are paying close attention to developments of the situation in Zimbabwe. Maintaining peaceful and stable development accords with the fundamental interests of Zimbabwe and regional countries, and is the common desire of the international community. We hope the relevant parties in Zimbabwe appropriately handle their internal matters.

Geng referred other questions to the Defence Ministry, which has yet to respond to Reuters’ request for a comment. There were reports in Zimbabwe that President Mugabe deployed senior military commanders outside the country as a way of isolating his former aide and deputy, former vice-president Emmerson Mnangagwa before firing him.