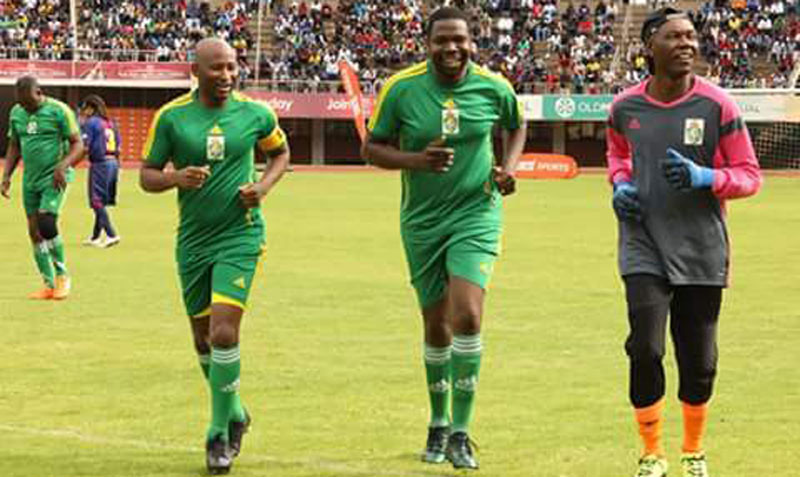 On Sunday, Prophetic Healing and Deliverance (PHD) Ministries founder Walter Magaya played in the exhibition match in which the Zimbabwe legends drew 2-2 with the FC Barcelona Legends. The match was played at the National Sports Stadium and is part of the country’s efforts to market Zimbabwe as a perfect tourist destination. Here is how some people reacted to the fact that Magaya played in the match despite the fact that he did not play professional football.

In a fairness , Magaya actually played well considering he hasn't previously been a professional football player. His inclusion in the team also spiced up flair & spectacle on what was really an amazing afternoon… It was an exhibition match after all!

When Prophet Walter Magaya forks out huge sums of money and hosts the national teams at his hotel, no one dares to breathe. Just this gesture of offering him a jersey as a guest player and everyone loses sleep. We are still petty in Zimbabwe

Don't forget to put Magaya in your fantasy teams this week.

Now I believe when they say nothing is impossible, prophet Magaya played as a Warriors legend!

Anyone or anything defending Magaya's participation yesterday is missing the whole point
"Football Capture" is now in full swing. Even an exhibition match should also be a display of professionalism & seriousness of association. ZIFA haisi a boozer association

What are the possibilities of "fixing" Yadah FC matches so that they stay in the PSL??

It's sickening that Profit Magaya used his dirty money stolen from gullible followers to buy his way onto the Zimbabwe 🇿🇼 Legends VS Barcelona 🇪🇸 Legends match. pic.twitter.com/QdG5bPuFCy

I am sorry but how in the world did this happen? Since when is Magaya a Zimbabwean football legend? This is a bit insulting to football supporters the former players. pic.twitter.com/uDGXPquTp9

The zbc doesn't cease to amaze, they see a great soccer player in Magaya and a visionary leader in Dr Grace. They also see Mugabe's 37 year stint as Zim's ruler as a success story. In other countries, the entire zbc staff would need mental health therapy in post Mugabe era

When will our people stop being stupid? Why are these ladies kneeling for Magaya with their hands up? 😳 pic.twitter.com/qO88X1M5KS

they made a mockery of the Warriors shirt.. #Magaya

Why is Magaya playing for Warriors legends vs @FCBarcelona legends?which warriors team did he play for?how is he a legend?@StarfmZimbabwe @263Chat @CynicHarare @philchavars65

Scandal: Read how Walter Magaya is portrayed as having played better than all soccer legends including Peter Ndhlovu/Chunga/ etal