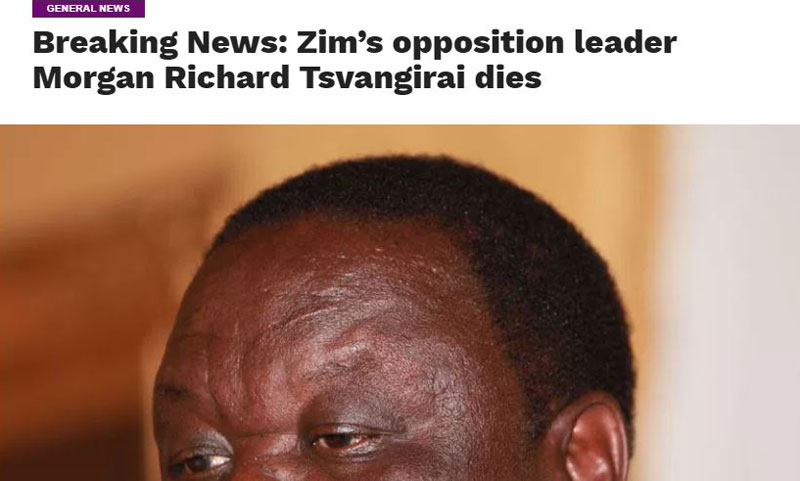 MDC-T Vice President Nelson Chamisa has dismissed as fake news, an article that is circulating on some websites that MDC-T President Morgan Tsvangirai has died in South Africa. Pindula reached out to Chamisa, after getting numerous enquiries on whether it was true that Tsvangirai had actually died. The article is believed to have originated in the Houston Chronicle. Part of the article reads:

According to the local media, Tsvangirai had gone to South Africa for a routine medical check-ups, but he developed low blood pressure during the medication and subsequently passed away at around 6:00 am Zimbabwean time today.

“Sadly I can confirm our leader is gone, his legacy still lives with us,” a senior official from Tsvangirai’s Movement for Democratic Change (MDC) told the local media, speaking on condition of anonymity.

Luke Tamborinyoka, Tsvangirai’s spokesman, earlier disputed what he termed “morbid media reports that he was critical and is battling for his life”, insisting he had gone to South Africa for a routine medical procedure and “is in a very stable condition.”

Tsvangirai, 65, announced last year he had been diagnosed with cancer of the colon and had begun chemotherapy.

News Day independent daily earlier reported Tsvangirai was airlifted to South Africa last night after he fell ill again, just ten days after his last trip. “He was on oxygen and drip and had been vomiting heavily,” the paper said.

One Comment on “Confirmed: Morgan Tsvangirai is NOT dead”