We quote from the thread:

Recall that Prof Moyo was made Minister of Info in 2000, after ‘sterling work’ as spokesman for govt’s failed new Constitution campaign.

ZBC was Moyo’s principal propaganda tool, but then in Sept 2000, Supreme Court nullified its monopoly, saying it was unconstitutional.

Supreme Court ruled on 22 September 2000 that private broadcaster Capitol Radio could operate within the country. Moyo was angry, of course

That radio ruling was similar to one granted to Econet ; “no person shall be hindered in the enjoyment of their freedom of expression”

In violation of a court ruling allowing Capitol radio to operate, Moyo personally supervised the dismantling of its equipment at Monoz Hotel

After he was done protecting ZBC’s monopoly, he went about destroying ZBC. More on that later. Jonathan, meanwhile, turned to newspapers…

In 2001, Daily News was the biggest paper in Zim. Bigger than Herald, the biggest state controlled newspaper. This had to be ‘sorted out’

In Jan 2001, Moyo threatened Daily News: “It is now only a matter of time before Zimbabweans put a final stop to this madness…”

Just a few days after Prof Moyo threatened to end “the madness” at Daily News, the paper’s printing press was bombed. Coincidence. 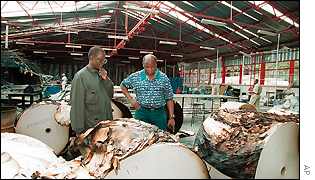 Meanwhile, at ZBC, Moyo started destroying the broadcaster. He split it into many parts and fired experienced staff.

There was no money for Prof’s ZBC ‘strategic business units’ and they all drained the holding company dry.Big losses, more retrenchments

At Herald, Prof Moyo fired editor Bornwell Chakaodza for challenging him; replaced him with Ray Mungoshi, who was to last only 7 months

Moyo would call Mungoshi, ordering him to place fake stories in Herald, telling him what next day’s Editorial should be (Wikileaks, 2011)

When Mungoshi refused to publish a fake story (about Masiyiwa), Moyo started bypassing the editor, going to editor’s juniors with orders.

So, Mungoshi, as Herald editor, would wake up in the morning to find stories he had not authorised on the front pages of the paper.

In 2003, DailyNews was shut down after refusing to register under AIPPA. Year later, another paper, Tribune, also shut down. Many jobs lost.

At ZBC/Herald, the destruction continued under Jonathan’s chosen editors; inexperienced and loyal only to him, not readers or even boards

Under Prof Moyo, the main news of the day at ZBC/Herald would be whatever “Munhumutapa” wanted. For fear of losing jobs, nobody resisted.

To this day, that Moyo culture remains at ZBC and Herald; many professional journalists there, but they can’t risk expressing themselves

Today Prof complains daily about the lack of professional journalism at Herald. He is right. But don’t pity him. He’s reaping what he sowed