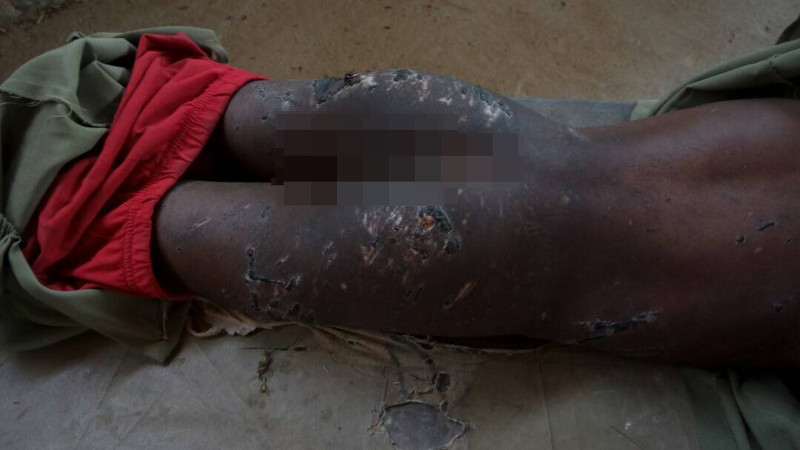 Norton Magistrate Barbara Chimboza sentenced Jameson Mugwagwa and Richard Mugwagwa to community service despite describing the two’s conduct as “inhumane and torture.” The two men who are guardians to Collins Mugwagwa(9) tied the minor to a metal pole and took turns to assault him all over his body using a wooden stick. As a result of the brutal assault, the boy suffered horrific injuries. Collins was purportedly being beaten for letting the family’s cattle roam unattended. This happened at Elstonhood Farm in Norton.

After the brutal assault, salt and water were repeatedly applied to his wounds and he did not receive any medical attention. He was also warned not to reveal the torture to anyone or else he would get more of the same. The two men were only arrested after Norton MP  Temba Mliswa learned of Collins’ plight and made a police report.

Jameson Mugwagwa (20), the victim’s maternal uncle was sentenced to 24 months imprisonment, of which six months were suspended on condition that he does not commit a similar offence within the next five years.The remaining eighteen months were commuted to 630 hours of community service to be completed within 20 weeks

Richard Mugwagwa (59) the victim’s maternal grandfather was found guilty of Ill-treating or Neglecting A Young Person. He was ordered to pay a fine of $100 or serve 30 days in prison. A further three months prison term was wholly suspended on condition that he does not commit a similar offence within the next five years.

Norton is a Town located in Chegutu District, Mashonaland West Province. It is located about 44.5km west of the Zimbabwean capital, Harare. It is surrounded by farms and forest plantations. It is also home to the Darwindale Dam. Read More About Norton