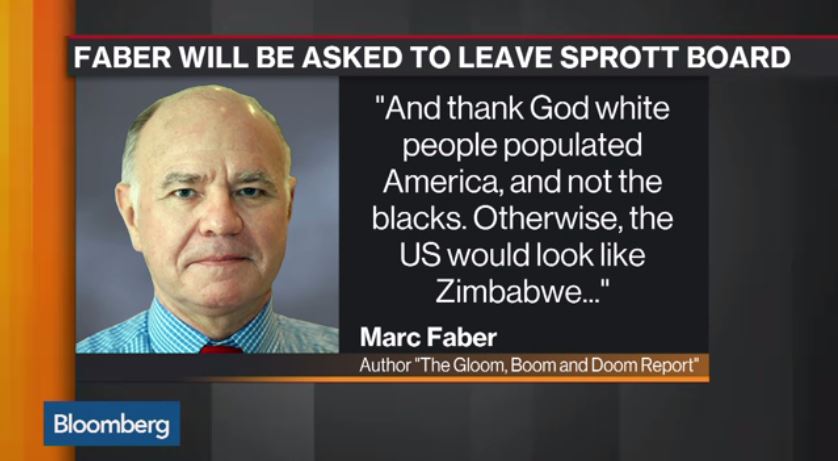 Swiss investor and business-television commentator Marc Faber has been forced to step down from he boards of money manager Sprott Inc. and mining companies Novagold Resources Inc. and Ivanhoe Mines Ltd. Swiss following his racist comments in a  15-page edition of his investor letter, “The Gloom, Boom & Doom Report.”  Television networks CNBC and Fox Business Network said they will no longer book Faber on their shows.

In the October edition, Faber wrote:

And thank God white people populated America, and not the blacks. Otherwise, the US would look like Zimbabwe, which it might look like one day anyway, but at least America enjoyed 200 years in the economic and political sun under a white majority.

If you have to live in a society where you cannot express your views and your views are immediately condemned without further analysis and analysis of the context in which [they’re written] — if you can’t live with that, then it is a sad state of where freedom of the press and freedom of expression have come

If stating some historical facts makes me a racist, then I suppose that I am a racist. For years, Japanese were condemned because they denied the Nanking massacre

2 comments on “Wall Street analyst says if black people had populated America, “the US would look like Zimbabwe””

Wall Street analyst says if black people had populated America, “the US would look like Zimbabwe”