Australian based political commentator and Herald columnist Reason Wafawarova has controversially advocated for Gukurahundi saying that he wishes President Mugabe could kill another 20 000 people. Wafawarova, who is an avowed supporter of Vice President Emmerson Mnangagwa was speaking out against President Mugabe on his Facebook wall and said that he could not understand how Ndebele people could continue to support Mugabe as he had been responsible for the slaughter of their people. Wafawarova was referring to the Gukurahundi Massacres which occurred in Matabeleland and Midlands in the 1980s and resulted in the slaughter of thousands of people, estimated to be 20 000 by some sources. Wafawarova went on to say that he wished for another 20 000 deaths so that the “stupid breed of useless people” could wake up.

You are busy supporting the very man who killed your people. You deserve more of that treatment I would say. I wish Mugabe could do another 20 000 deaths round on you so that you can wake up. Very stupid breed of useless people.

The post seems to have been deleted. However, he is a screenshot: 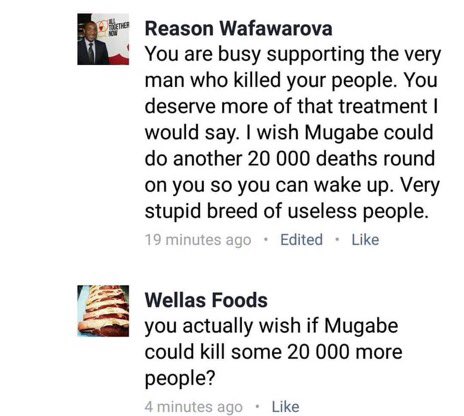 Wafawarova is no stranger to controversy, after he recently shared another post in which he seemed to advocate for a military coup against President Mugabe. The columnist posted the following:

Any transitional government for Zimbabwe will be celebrated across the world, even one that comes by the barrel of the gun.

I am only responsible for what he sends to The Herald, this – I assure you – wouldn’t find space in The Herald.