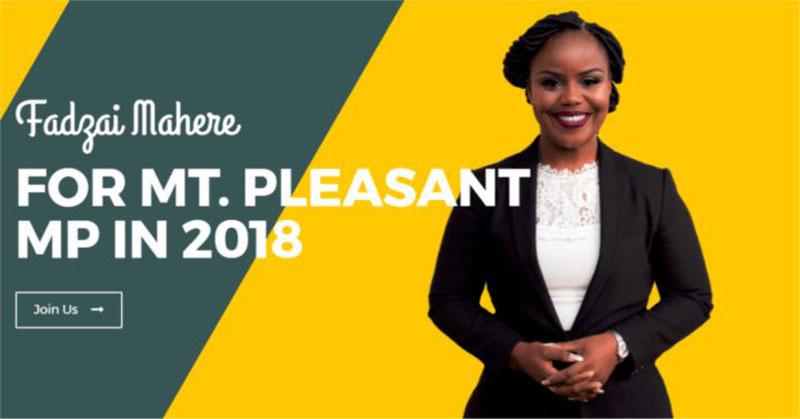 Prominent lawyer and human rights defender Fadzayi Mahere has announced that she will be running for office in next year’s harmonised elections. She has decided to stand for MP in Mount Pleasant constituency, which is currently being held by Zanu-PF.  She made the announcement on Facebook Live.

ISSUED BY: Fadzayi Mahere – BE THE CHANGE Campaign

If you had asked me where I would be today a year ago, I certainly wouldnt have said here. Last year, as we all know, the Reserve Bank Governor- Dr Mangudya made an announcement that rocked me to my very foundation. With such ease and no supporting legislation, he casually announced the introductistit of the bond note. had already been outraged by the introduction of the bond coin and here we were continuing along this illegal path.

To say that I was appalled is an understatement. The silence of our legislators and parliamentarians on this direct infringement of our laws was even more alarming. Our government was unapologetically breaking the law, so when I was asked to step outside my comfort zone and speak out for those who may not have completely understood the legal implications of this move. I had to agree. Unknown to me, this encounter with the governor and the passionate young Zimbabweans who attended this dialogue, would leitd me down a path I could have never imagined. A path that has forced me to look outside myself and find in my fellow Zimbabwean a glimmer of the hope we have for our future. The hope for more, the dreams and desires of This Flag’. On this path, we have h. to help one another raise our whispers into a roar, to spe. out, ask questions and act. To see within each other the solutions we have for our future.

We have tried to encourage accountability and transparency but have been met with resistance, half-truths and most ironically silence. Our government is asleep and our parliament is largely incapable of representing the best interests of the dtizens. There are reports of parliamentarians who spend an entire year without speaking. How can you represent the concerns of citizens if you never stand up to be counted?

We have watched dubious legislation pass through parliament with very little opposition and even less civil engagement. When was the last time our members of parliament came into the community to discuss issues or deliberate proposed

As young Zimbabweans, the time has come for us to acknowledge that being passive is making us complicit in the failure we see around us. For too long we have elected people to represent us in parliament, in council, in senate only to be disappointed. Too many of our elected officials are never seen in our constituencies until its election time again. Too few of them are found in parliament when it is time to hold the government to account and ensure that they are working in the best interest of the people.

I am surrounded today by some residents from Mount Pleasant who have kindly agreed to support my bid to run for this constituency. It is my promise that I will represent this community with honesty, integrity and passion. I will spend the same fervour and zeal I have used in my professional career in the legal field to advocate for Mount Pleasant and the interests of Zimbabwe’s emerging generation.

You have heard it said, “Be the change you want to seer Never has this been truer for Zimbabwe than it is today.

I am Fadzayi Mahere and I am running for MP.