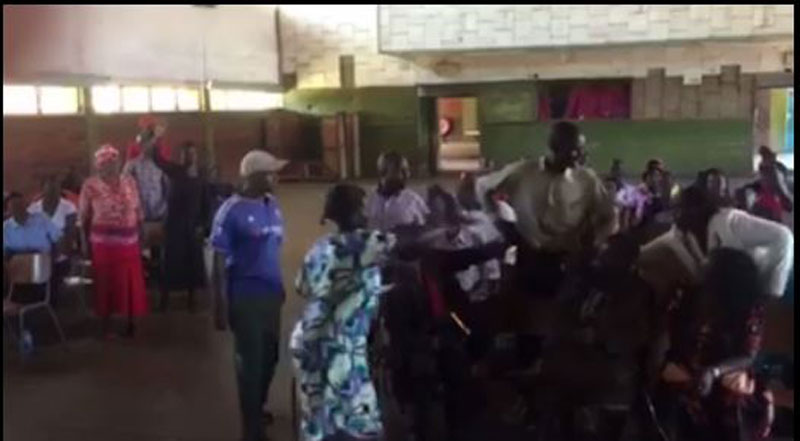 The video was recorded by Harare West legislator Jessie Majome at a public hearing for the National Peace and Reconciliation Commission Bill. According to Majome

The man being yanked by the belt and held down for about a full 15 minutes and thereby shut up and blocked from presenting his views by the 4 plus 1 Bindura ZANU PF councillors led by the ‘lady’ Deputy Mayor, was one of the 1st 3 people to sit and wait in the hall for us having travelled from Manomano village in Chiweshe some 40 away. He is Hilton Chironga a survivor of one of the most brutal and horrendous 2008 Presidential election run-off campaign bloodbath episodes. His brother freshly elected MDCT councillor Gibbs Chironga MHSRIP wasn’t so lucky as he was shot dead together with their cousin in a dawn raid at their homestead by a ZANU PF horde that started by torching the family pigsty, chicken coop huts while advancing to the bedroom hut of Hilton Chironga and his now deceased brother to smoke MDC supporters..