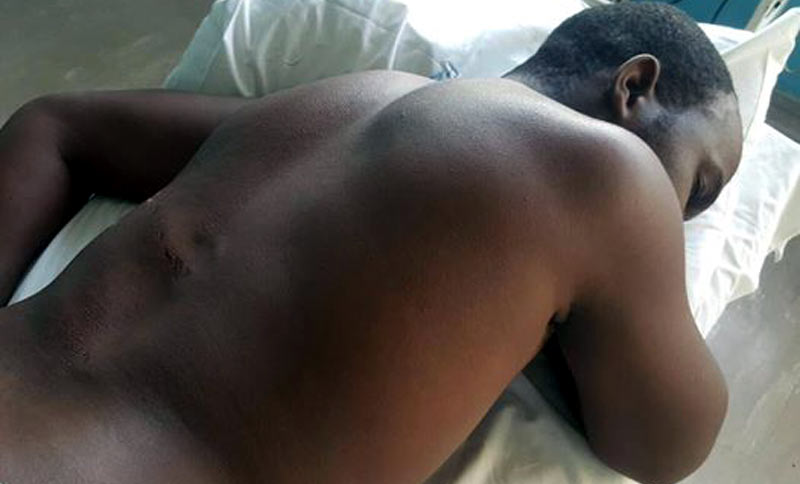 In a lengthy Facebook post, political activist Patson Dzamara recounted his abduction. The narration is similar to what had been released by the Zimbabwe Lawyers for Human Rights on Friday. You can read Dzamara’s version of what happened below;

MUGABE AND HIS MINIONS CAN NEVER KILL ME. I AM PROTECTED BY THE ALMIGHTY GOD AND I HAVE A LEADERSHIP ROLE TO PLAY IN THIS NATION BEFORE I EXIT THIS WORLD.

By now I am sure the story about what happened to me on Friday morning has been told and of course there are so many theories and versions being promulgated. Everyone is indeed entitled to their opinion.

Unidentified armed men blocked two vehicles in which we were travelling in, during the early hours of Friday 18 November 2016 in Harare. Some of my colleagues fled in the mayhem and the armed men proceeded to blindfold me and bundled me into a truck before setting our vehicles ablaze.

I was assaulted on the back of the head and all over my back with spikes which had been thrown in front of my vehicle before being driven to a place which I strongly suspect to be Lake Chivero.
Throughout my detention in the truck, a gun was stuck to my neck. I was warned that i had not learnt from the fate of my missing brother and was told that; “Hauna kudzidza pane zvatakaaita kumukoma wako manje nguva yekudzidza yakwana,” loosely translated to mean; “You haven’t learnt and taken heed of how we treated your brother and now your time to learn is upon you.”

While at the lake, the unidentified men spent some time talking to a man whom they referred to as ‘Boss’ inquiring whether to proceed with option one or option two and during their consultation with the ‘Boss’ they indicated that they had containers, iron bars and cotton but no ‘catalyst.’ I suspected that the unidentified men intended to throw me in Lake Chivero but they eventually tied up my hands and dumped me undressed near Snake Park in Norton and along the Harare-Bulawayo highway after tearing up all my clothes and further assaulting me.

I crawled to the road seeking assistance, but passersby kept a distance thinking i was a witch. In fact one man i suspect was drunk stopped his car about 20 meters from where i stood and he shouted at me that i was a witch and he would return to beat me up. It was difficult for me to get help and transportation because I was still in pain and it is even more difficult to get transport when you don’t have clothes, but eventually, I was assisted to get to a service station and called my brother, who delivered me to the hospital.

I am still in hospital and recovering well. I thank God that I didn’t suffer any internal injuries and should be up and running soon.
Despite the fact that I lost my car which I named struggle and other valuables, including three smart phones, an IPad, a laptop and clothes, I am not at all moved. The same God who blessed me with those items will still provide for me.