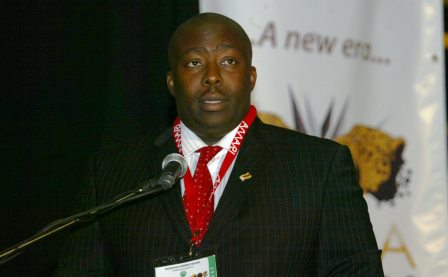 Minister of Local Government, Public Works and National Housing, Saviour Kasukuwere said he will push for the takeover of bulk water rights from the Zimbabwe National Water Authority (Zinwa) by councils. Zinwa is in charge of raw water bodies while local authorities are responsible for purifying and pumping the water to residents.

A number of local authorities countrywide have said they are failing to provide enough water to their residents mainly because Zinwa has no capacity to pump enough water due to obsolete equipment among other reasons. Councils appealed to Kasukuwere at a recent Local Government Investment Conference to assist in addressing the problem.

He promised to engage his counterpart Minister Oppah Muchinguri-Kashiri over the issue.

As for Gwanda, the town is doing well. The town is turning around now they have capacity and can manage water. Engineer Tommy Rosen (Zinwa catchment manager for Umzingwane), can you allow Gwanda to control their water because they have capacity now. I used to be on environment side but now I have to support local authorities. I will talk to Minister Muchinguri-Kashiri to allow such local authorities manage bulk water supplies so that they can earn a few dollars.

GUIDANCE AND COUNSELLING FOR TEACHERS WORKSHOP
US $200.00 Harare
Loans
US $0.00 Harare